when kids are free and wonder 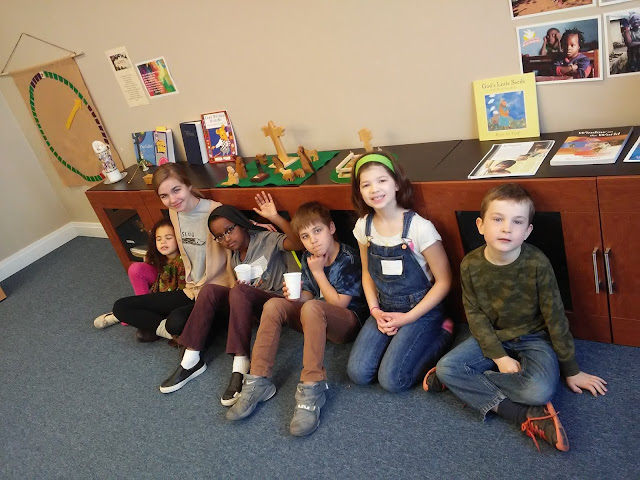 I had the privilege of serving as a storyteller and wondering leader this morning with a group of children at church.

At our church we practice a method of children’s ministry which we call Worshipful Play; it’s a combination of stories and methods from three approaches to childhood spiritual development[i]. The method is marked by freedom and, after telling a Bible story, we practice a type of conversation called wondering. Each time a new question is posed, we begin with the phrase “I wonder…” The intent of wondering is not so much to get “right” answers from the children as it is to open them up to approach the Bible with curiosity and imagination. When real wondering happens, the child experiences faith as integrative.

At the beginning of a Worshipful Play session, the children enter the room one at a time, after having passed the peace of Christ with one another and after having been asked by a worship leader, “Are you ready?”

The children are accustomed to entering the room and forming a circle on the floor in the storytelling space, which contains all the stories of Scripture in the form of a diverse array of materials that children can work with personally. The materials look like wooden “toys” but we ascribe high value to each piece by how we work with it and handle it with gentleness, slowly savoring the specialness of God’s Word.

After we form the circle, we have a phase that helps us “get ready” to hear the story. Depending on the week, and depending on the age group, what we do during this phase can vary, but one thing we always welcome is simple conversation, so we have a chance to hear about what is going on in each other’s lives.

As a storyteller and wondering leader, this is invaluable to me because it helps me pay attention to what might be especially meaningful for each child as we proceed, what questions might come forth and what part of the story might be most helpful to feed their faith.

Sometimes this pre-story conversation is short and sometimes it is long. As a worship leader, I try to remain open and sense what’s important for that particular day. Today was interesting because one young boy wanted to mention two significant things right away. The first was that he was happy because “in four to eight weeks” his little sister whom his family had been waiting to adopt for a long, long time, was finally going to be able to join them.

He pointed out that at first he thought his parents said “forty eight” weeks and was disappointed by that, but when he heard it was only “four to eight” he was so glad!

He went on to share about someone he knew who had a heart attack and I asked if he wanted us to pray for their family friend as well as his sister who was soon to arrive. He decided we'd pray for that later during the feast time, but as it was time to start, he volunteered to pray as we continued getting ready for the story time.

As he bowed his head, the children decided they wanted to hold hands, so we all joined hands in a circle and prayed together.

After that, Bek brought the Christ candle to the circle. The Christ candle is a large pillar candle that we light every week. When we do so, I remind the children that Jesus said he is the light of the world, so we light the candle to remember that Jesus is with us, “even if we think we can’t see him.”

Today, we sat and just enjoyed looking at the light. Then, before putting it back on the shelf (where it would be safe) I mentioned that, even when we are in dark places, the light is always there, even if we think we can’t see it. We talked about two other people the children knew who had a heart attack that week and we talked about one man who had died recently, Ben’s great-grandfather.

Then, we told the story which happened to be the account of the transfiguration of Jesus. The story starts by reminding the children that Jesus and the disciples had come from the towns and villages, spreading the good news. Even though Jesus had been saying along the way who he really was, some of the people still did not understand.

Peter replies that he believes Jesus is “the Christ”, the One they have all been waiting for.

Jesus confirms what Peter said and adds that now he was going to go to Jerusalem where he would be killed, but then on the third day he would come back to life—but, Jesus assures them that before all that would happen, some of them would see the kingdom of God come in power, first-hand.

Well, Jesus spends about six more days with the disciples, alone…teaching them. Then, Jesus goes to a mountain and he takes Peter, James and John with him. While praying, the story says that suddenly the place became filled with heaven’s glory, Jesus’ face shone like the sun and his clothes became radiant. The disciples were startled, fearful as they saw Jesus with Elijah and Moses. The whole place was enveloped as in a cloud and a Voice said: “This is my Son, whom I love. Listen to him.”

With that the episode ended, the disciples did not know where Elijah and Moses went and Jesus appeared to them as he always had.

Another child said, “Maybe it’s because they were brothers.” So, we talked about that and noted that Peter’s brother was Andrew, but he was not there. “I wonder why.”

Then, I asked, “I wonder…if you were in this story, who would you be?”

One child said, “Jesus!” I looked at him startled, and then he gave a very good explanation: “God sees special things in me, like he did with Jesus.”

To which another child said, “There are special things in everyone, so we all could be Jesus.”

“Yes, that’s right. Everyone has something special about them. That’s right.”

Wow, we said, this story is really a story for today, isn’t it?

Meanwhile, Bek stood up a couple of times to say who he would be. When the conversation turned to what he wanted to tell us, he said: “I would be this person”—and he pointed to a large figure of Jesus which we have that is part of another set of materials, for a different story.

I chuckled, thinking he was joking, and said, “That’s funny, Bek, but I wonder what person you would be in this story here.”

But he insisted, “This one.” And, again he held up the figure of the large Jesus from the other story.

He seemed serious about it, so I said, “Okay, let’s bring him here.” 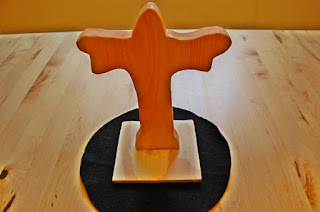 I asked, “I wonder what this Jesus looks like to you?”

He said, “He’s dancing and he never stops. He keeps dancing forever!”

Ben added, “That’s what we say when we tell the story in winter.”

“Yes, at Christmas time we say that. God wants us to dance with him.”

“Yeah!” Ben’s eyes lit up. “We say he’s ‘like a dancer who rests a little while to keep dancing forever.’”

Then, Esu had something to say: “I think he looks like he’s giving us a hug.”

Rosie was still enjoying the thought of God dancing with us, so she picked up the figure and started to do a little dance with him. 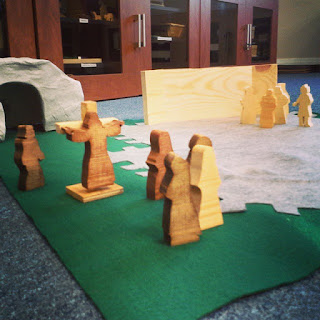 One child went over to a shelf where we have figures that tell the story of Jesus’ crucifixion and took out the figure of Jesus hanging on the cross.

“He looks like that, doesn’t he? This big Jesus is in the shape of a cross.”

The children held the little figure in front of the big figure to show how they were in the same shape.

I said to the children, “I like to think of it this way:”

After asking the child to explain the question more, we discovered he wanted to know why Jesus couldn’t “come back to life” and be with us again as he was with the disciples.

I said, “I wonder if Jesus is really alive now?”

The children thought about it and said, “Yes, he came back to life.”

I said, “I wonder, if we don’t see him, I wonder how we know if he is really alive?”

Ben stood up and said, “Because he’s with us!”

“Yes, we know Jesus is alive because we see him in us, especially when we are all together.”

We went on wondering:

“I wonder where this Jesus is in the story we told today?”

They made the connection that “this Jesus”, the large one from the other story, was in the story of the transfiguration when Jesus said he was going to die and come back to life.

Then, one child asked, “I wonder why we don’t come back to life when we die?”

And the other children said, “We do!”

“I wonder how that can be possible?”

Well, they noted, in the story the disciples believed in Jesus. They said he was the Christ, the one they had been waiting for. And, they said, when we believe in Jesus even if we die we will live forever.

The children started talking again about Ben’s great-grandfather. How he had died but just before then he said he believed in Jesus. So, we talked about how he wasn’t really dead now; he was with Jesus in heaven, alive.

Ben said, “I can’t wait to die because when I’m in heaven I won’t be allergic to peanuts anymore!” He laughed, but he was serious, too.

We talked about how in heaven there won’t be any sickness or disease or allergies or anything like that. How wonderful it will be!

We talked about one of the men who had a heart attack, how he thought it was going to be the end, but he was okay with it because he believed in the life Jesus would give him again.

The children wanted to tell Jesus they believed in him, too.

They held hands in the circle and everyone took a turn telling Jesus, “I believe in you.”

Each child had a special reason they believed in him. They weren’t the same.

One child said, “I believe in you because you are so wonderful and you love us.”

Another said, “I believe in you because of all the amazing things you made.”

Another one said, “I believe in you because you made the universe and the multi-verse.” He was serious.

Still another said, “I believe in you and I love you. Thank you that when we die, we won’t really die.”

Now you know why I say it is a joy and a privilege to be with these children. Their faith is genuine. They wonder and give their hearts to each other and to God, without reservation.

This is what happens when children are free and wonder—and it is very beautiful.

To learn more about the Worshipful Play approach to children’s ministry, contact Troy. We offer training!

PlayFull’s mission is to help people and organizations play from the inside-out. We invite you to like us on Facebook or follow us onTwitter. Thank you for reading.