Someone Who Understands Grace 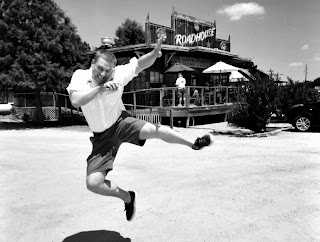 Later today I will fly to Austin, Texas to meet with PlayFull’s new board member, Dave Marmion. You can see from the picture: he's one serious dude. :)

I met Dave for the first time in Madrid, Spain back in 2003 when he was there with his brother Rob on a brief research trip, of sorts. A friend of theirs named Kelly Wills (now Kelly Jennemann) was planning on moving to Spain to pursue ministry among young people and they wanted to see if there were any churches who’d be keen to be a support to Kelly.

As it turns out, Kelly ended up doing an internship with us for some months. In theory, she was slated to move on after that, but we managed to “suck her into the vortex” (as we’d say jokingly).  So, we had the privilege of working with Kelly—a creative, passionate soul—for some years until she moved back to the States. After I met Dave that summer, however, I had little (if any) contact with him—but he continued to follow our ministry via our mutual friend Kelly.

In 2010, my wife, kids and I moved from Spain to Chicago. And that is when I really started getting to know Dave through some great phone conversations. He is a kindred spirit. And this is why I asked him to serve on the board of PlayFull:

He understands and lives out an ethos of grace, grace, wild grace.

Dave understands that we grow the most in the unknowns of life. He had been planning to step into ministry in Europe for a season but God had different plans. The desire to pursue ministry in Europe was in itself a step into the big unknown. I can personally attest that ministry is just about as messy as anything gets. (That may surprise you, but it’s true).

That said, when God directed Dave in a different path, I was impressed to see how Dave was able to open up his hands and relinquish that dream, even though it hurt to do so. Skeptics may have said, “Don’t give up. Keep pursuing your dreams, no matter what!” They might label such relinquishment “unwise”, “insane” or “depressing.”

I think of it as “trusting.” When one relinquishes something that dear, one does so as a sign of trust. "Opening our hands" is a way of saying, “I trust you, God, that—even though it hurts to give this up—you have my best interest at heart and you will give me something even better than I can imagine right now.” When we open our hands like this, we may need to wait for what is better, but in time it will come. I suppose this is the same kind of trust that infused Abraham with strength when God asked him to be willing to give up his own son. It seems crazy in our eyes, but God knew better and provided a way out of the insanity.

In short, he understands what PlayFull means when we say we want to help people and groups “play from the inside-out.” He's practiced that himself.

I could not be more thrilled to work alongside this kindred spirit. Welcome, Dave. I look forward to seeing you later today!  And to your beautiful family…Allyson, Zach and Owen: I look forward to playing with you all, too.  Hopefully, I won’t freak y’all out too much…J