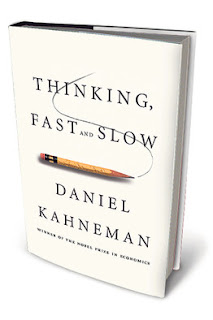 Daniel Kahneman won the Nobel Prize in Economics in 2002--an astonishing accomplishment considering his background is in the field of psychology. In Thinking, Fast and Slow Kahneman explores the relationship between the many intuitive, automatic choices we make and the judgments that require a slower process of thinking. He dubs these two modes of cognition “System 1” and “System 2”, respectively.

For instance, if I ask my teenage son to add 2 and 2, he would quickly respond: 4. His response would be automatic; he would answer without having to think about it. He would use System 1.

When he was first learning to add, however, this simple computation would have required the use of System 2, a slower process that involves counting—which, at very young ages, requires a great deal of mental effort.

To simulate the use of System 2 for most adults, I ask you to try the following exercise that’s taken from Kahneman’s book:

Seriously, this is no joke. You will use this metronome to keep time for our exercise.

With the metronome going, we are going to play “Add 1”. This means that on each beat, you are to add 1 to each digit you originally conjured, saying it out loud.

You are allowed to wait two beats after completing the set of four new digits, and then you must add one more to your new number. So…after 4-3-0-6 I would wait two beats and then say, in tempo, 5-4-1-7.

I suppose most readers did not even try the exercise because the instructions themselves serve as an example of “slow System 2 thinking.” In fact, I would venture to say that 99 percent of the people who read this post did not even open up metronomeonline as instructed! Too much effort for a silly game…

For those who did try it, I would wager you were unable to keep it up for more than 20 seconds. (I asked someone to do this the other day and they would not even try. Just thinking about it gave them a headache!)  If you were able to sustain the game for longer than 20 seconds, try the game again as “Add 3”.  Or, better still, try the game with five or six digits. Or, even better: try the game at a faster tempo. That should thoroughly humiliate you. J

The moral: it is possible to successfully play “Add 1” or “Add 3” for a long duration as long as we are not rushed in playing it. If we remove the restriction of the metronome, it becomes easier to think clearly and accurately. In a rushed context—when we are forced to think quickly—we tend to think wrongly or not at all.

Some things require slower thinking. Play is one of those things.

Often, play is thought of as a System 1/Quick process. We correlate it to intuition and spontaneity but a fuller form of play is actually a slower process. 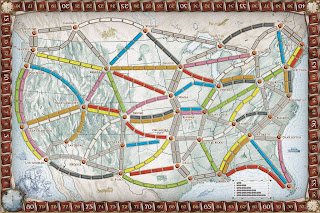 For example, I like to play a game of strategy called “Ticket to Ride”. The object of the game is to score the most points by building railways between various cities. Though there are many aspects to the game that become intuitive (System 1), much of the game requires slow thinking (System 2). My wife laughs at me because I often always have to take long periods of time to think about what I want to do next. (This is my secret to winning!)

Some games impose a time limit, however. Rummikub is an example of this. I find it difficult to manipulate the always-diverse array of number sequences and sets in creative ways. 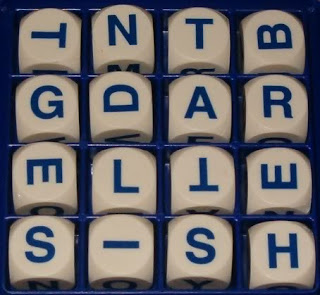 Boggle, on the other hand, is easier to play because I have learned some automatic permutations of certain letter combinations, which automatically increases my word count. In other words, playing Boggle for me is mostly a System 1 activity. It requires very little use of my System 2 reservoir.

For example, I have learned that unless they appear in a straight line, the letters T, A and E can always be reconfigured in Boggle to produce three words: “tea”, “eat” and “ate”.  Rat, art and tar also work this way. Writing those three words down in the space of 1.5 seconds has become a System 1 function for me. I don’t even have to think about it. Finding the five and six letter words proves more difficult for me (whereas my mother always likes to look for those longer words first—which is why I always beat her!).

At any rate, I point this out to say that play applied in other contexts usually requires the discipline of patience if we are going to tap into all it has to offer.

In my experience as a team leader and team builder I am always struck by how people respond when we try to make arrangements to play together so as to make it possible to develop truly collaborative ideas.

Most teams do not want to take the time to play, experiment, imagine. But, when they slow down and take this extra (seemingly “wasteful”) time, they are always glad they did it! 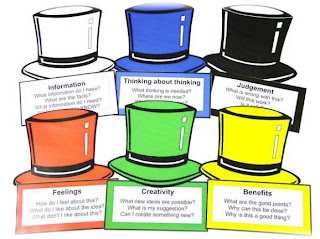 Edward de Bono proposes a method for teams to help develop this creative potential. He calls it the 6 Thinking Hats. Each “hat” involves a process of looking at an idea from a different angle so as to uncover unforeseen possibilities and avoid needless obstacles. Were we to employ the process of the 6 hats in decision-making, we would find ourselves slowing down before making snap judgments based on mere intuition.

The problem is, Kahneman argues in his book, we rarely slow down to do this kind of thinking. I happen to agree with him.

We think, “If we take time to do this and nothing comes of it, we will have wasted a whole bunch of time!” It takes a certain measure of trust and risk to slow down.

In the case of de Bono’s 6 Thinking Hats, I wonder…
1. What percentage of working teams know the substance of the 6 Thinking Hats?
and
2. How many teams regularly discipline themselves to actually use the 6 Hats in a week-in, week-out fashion for sustained periods of time?

Again, if I were to place a bet on these two questions, I would wager the numbers would be very low.

This kind of ideological play takes time and as we get older we access System 2 much less than when we were children. What used to be a System 2 function now becomes a System 1 function—so as we grow older we end up using System 2 less and less.  How tragic!

The adage “you can’t teach an old dog new tricks” can be broken if we “old dogs” can learn to take time and remain open to “learning new tricks”.  Basically, we need to be willing to be kids again: play slowly.

If you or your team would like assistance with this kind of slow, creative thinking, write us! We offer team building and personal coaching. Click here to find more PlayBook reviews and book titles.

Posted by Troy Cady-PlayFull at 06:00